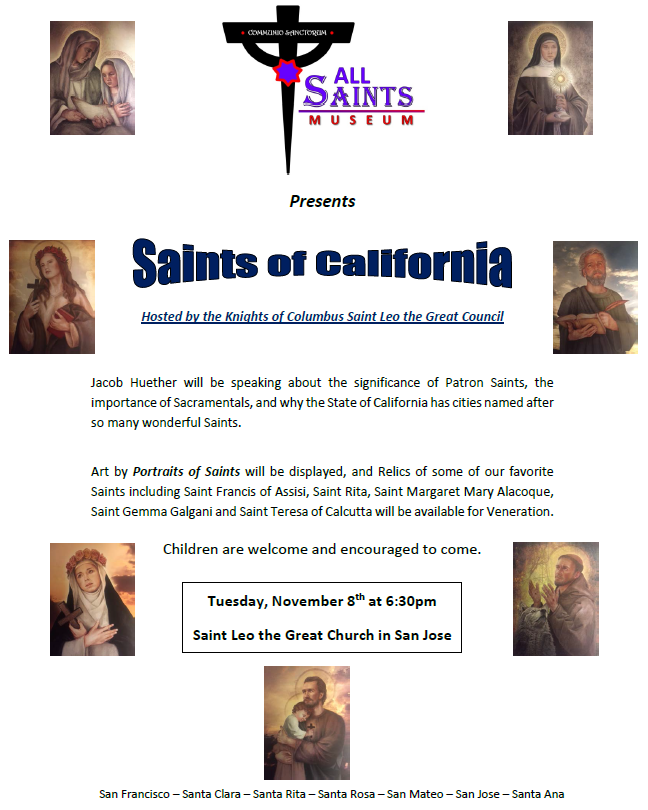 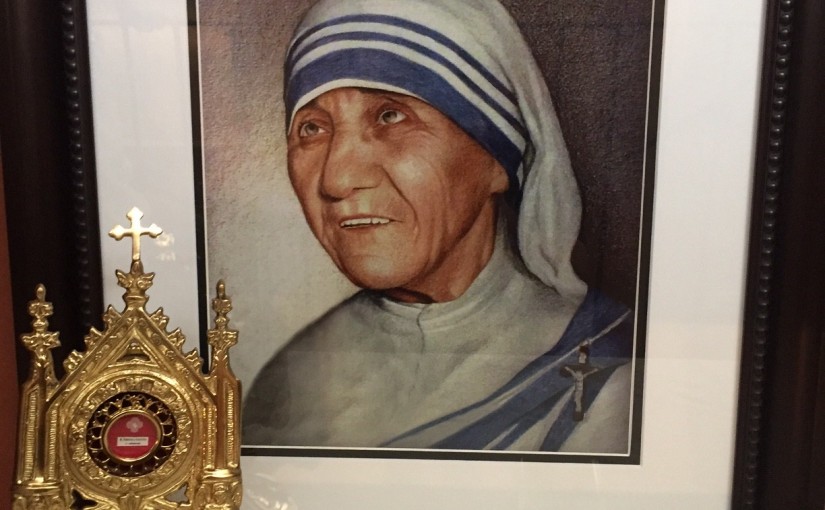 “By blood, I am Albanian.  By citizenship, an Indian.  By faith, I am a Catholic nun.  As to my calling, I belong to the world.  As to my heart, I belong entirely to the Heart of Jesus.”. – Saint Teresa of Calcutta

All Saints Museum Family, the wait is over!

Saint Teresa of Calcutta has finally been officially Canonized!

Saint Teresa of Calcutta was born on August 26, 1910 in Skopye, which is in Macedonia.  Her father died when she was only eighth years old, and so her mother took care of their family.

When she turned 18 she became a nun and was given the name Sister Mary Teresa after St. Therese of Lisieux.

“Mother Teresa” has become one of the most well known Saints of our times – even considered a saint during her life.  But controversy wasn’t far behind her.  Like many mystics and holy people, Saint Teresa of Calcutta was sometimes misunderstood.  In fact she experienced the “Dark Night of the Soul” (an experience many Saints have had) for much of her life.  But she never lost faith, never lost hope.  The countless souls she touched brought glory to God.  And He was pleased to look down on her.

Please check out our Saint Teresa of Calcutta Exhibit, where we have a 2nd Class Relic of her given to us by the Missionaries of Charity.

And also view our Live Wax Museum video of Saint Teresa of Calcutta on our You Tube Channel.  Don’t forget to subscribe.

The portrait of Saint Teresa of Calcutta in the pictures is from our friends at Portraits of Saints.  Please visit their site and support their ministry – inspiring people through the Saints.

Saint Teresa of Calcutta, Pray for us! 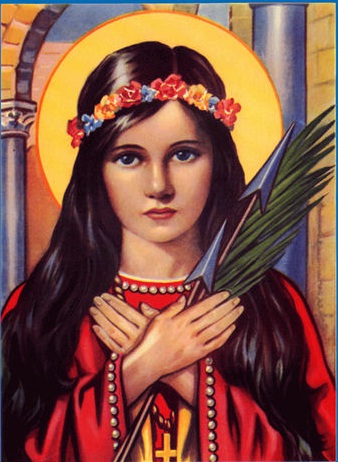 Our Holy Card Project page has been updated with several August Saints.  Although we love all the Saints, there are several August Saints that are my personal favorites.  One of them is Saint Rose of Lima – who happens to be the patron Saint of Peru where my wife and her family hail from.  Another favorite Saint of mine is Saint Philomena.  You can learn more about St. Philomena at the following links:

God bless, and enjoy the final weeks of Summer. 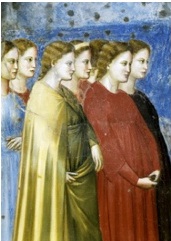 I recieved this in an email from a good friend and wanted to pass it along.

My friend is Greek Orthodox. In his Church, they make the sign of the cross crossing themselves from the right shoulder to the left, but we do the opposite. Why is there a difference? When did this come into practice?

St. Cyril of Jerusalem (d. 386) in his Catechetical Lectures stated, “Let us then not be ashamed to confess the Crucified. Be the cross our seal, made with boldness by our fingers on our brow and in everything; over the bread we eat and the cups we drink, in our comings and in our goings out; before our sleep, when we lie down and when we awake; when we are traveling, and when we are at rest” (Catecheses, 13). Gradually, the sign of the cross was incorporated in different acts of the Mass, such as the three-fold signing of the forehead, lips, and heart at the reading of the gospel or the blessing and signing of the bread and wine to be offered occurs about the ninth century.

The earliest formalized way of making the sign of the cross appeared about the 400s, during the Monophysite heresy which denied the two natures in the divine person of Christ and thereby the unity of the Holy Trinity. The sign of the cross was made from forehead to chest, and then from right shoulder to left shoulder with the right hand. The thumb, forefinger, and middle fingers were held together to symbolize the Holy Trinity — Father, Son, and Holy Spirit. Moreover, these fingers were held in such a way that they represented the Greek abbreviation I X C (Iesus Christus Soter, Jesus Christ Savior): the straight forefinger representing the I; the middle finger crossed with the thumb, the X; and the bent middle finger, the C. The ring finger and “pinky” finger were bent downward against the palm, and symbolize the unity of the human nature and divine nature, and the human will and divine will in the person of Christ. This practice was universal for the whole Church until about the twelfth century, but continues to be the practice for the Eastern Rites of the Catholic Church and the Orthodox Churches.

An instruction of Pope Innocent III (1198-1216) evidences the traditional practice but also indicates a shift in the Latin Rite practice of the Catholic Church: “The sign of the cross is made with three fingers, because the signing is done together with the invocation of the Trinity … This is how it is done: from above to below, and from the right to the left, because Christ descended from the heavens to the earth, and from the Jews (right) He passed to the Gentiles (left).” While noting the custom of making the cross from the right to the left shoulder was for both the western and eastern Churches, Pope Innocent continued, “Others, however, make the sign of the cross from the left to the right, because from misery (left) we must cross over to glory (right), just as Christ crossed over from death to life, and from Hades to Paradise. [Some priests] do it this way so that they and the people will be signing themselves in the same way. You can easily verify this — picture the priest facing the people for the blessing — when we make the sign of the cross over the people, it is from left to right….” Therefore, about this time, the faithful began to imitate the priest imparting the blessing, going from the left shoulder to the right shoulder with an open hand. Eventually, this practice became the custom for the Western Church.

In the classic work, The Ceremonies of the Roman Rite by Adrian Fortescue and J. B. O’Connell, the sign of the cross is made as follows: “Place the left hand extended under the breast. Hold the right hand extended also. At the word Patris [Father] raise it and touch the forehead; at Filii [Son] touch the breast at a sufficient distance down, but above the left hand; at Spiritus Sancti [Holy Spirit] touch the left and right shoulders; at Amen join the hands if they are to be joined.” Although this practice may have evolved from the original and still current practice of Eastern Rite, it nevertheless has been the standing custom for the Latin Rite Church for centuries.

No matter how one technically makes the sign of the cross, the gesture should be made consciously and devoutly. The individual must be mindful of the Holy Trinity, that central dogma that makes Christians “Christians.” Also, the individual must remember that the cross is the sign of our salvation: Jesus Christ, true God who became true man, offered the perfect sacrifice for our redemption from sin on the altar of the cross. This simple yet profound act makes each person mindful of the great love of God for us, a love that is stronger than death and promises everlasting life. The sign of the cross should be made with purpose and precision, not hastily or carelessly.

If you live in the Bay Area of California, please don’t miss out on this opportunity.

“Why Life is the First Issue” will be addressed by nationally-known pro-life activist Lila Rose at St. Frances Cabrini Church, 15333 Woodard Road, in San Jose on Wednesday, August 10. A reception on the plaza begins at 6:30 p.m., followed by her talk in the church at 7:15. Lila led the first undercover investigations of Planned Parenthood, revealing the abortion giant’s extremism and cover ups of sex-selection abortion, child abuse, racism, infanticide and sex trafficking.

Sponsored by the Evangelization Committee of St. Frances Cabrini Church, this is part of a series of programs on the second Wednesday of each month. 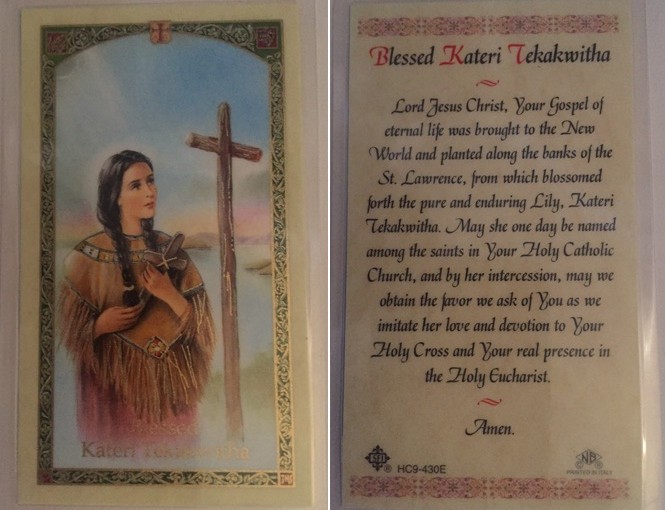 There is a rich history in the Catholic Church for the use of Holy Cards.  This very pious practice dates back to the 1400’s in Europe. The earliest “holy card” was a wood block print of Saint Christopher dated to 1423.  You can learn more about the history of holy cards  at the following links:

All Saints Museum has an art project in the works that will require holy cards, and we also enjoy donating “used” holy cards to those who need them most.  If you have duplicate cards, or used cards that you don’t want anymore, please donate them to All Saints Museum (P.O. Box 53356, San Jose, CA 95123) – we are a non-profit and 501c3 company. 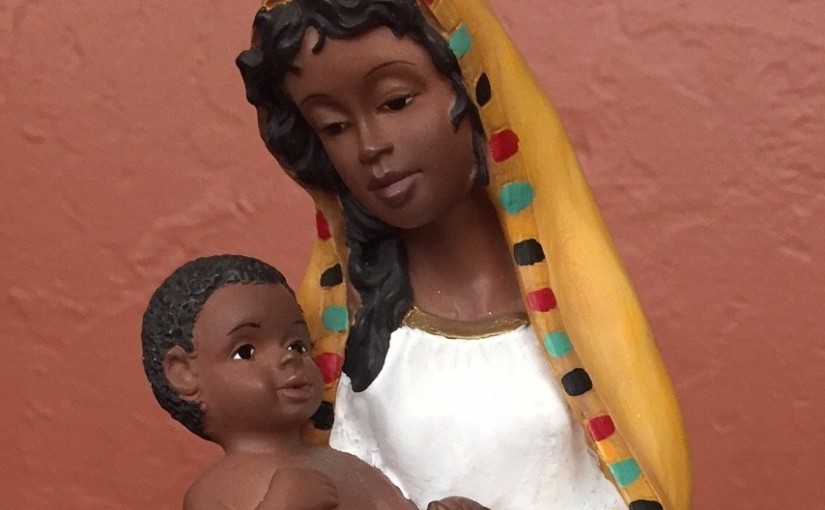 All Saints Museum has added a the Blessed Virgin Mary Exhibit to our collection.  Please take a look. The last picture in at the link is one of the most interesting finds we have.  It is an African Virgin with the Blessed Infant Jesus.  This image demonstrates the universality of the Church and Mary’s motherhood for all.  I hope you enjoy. 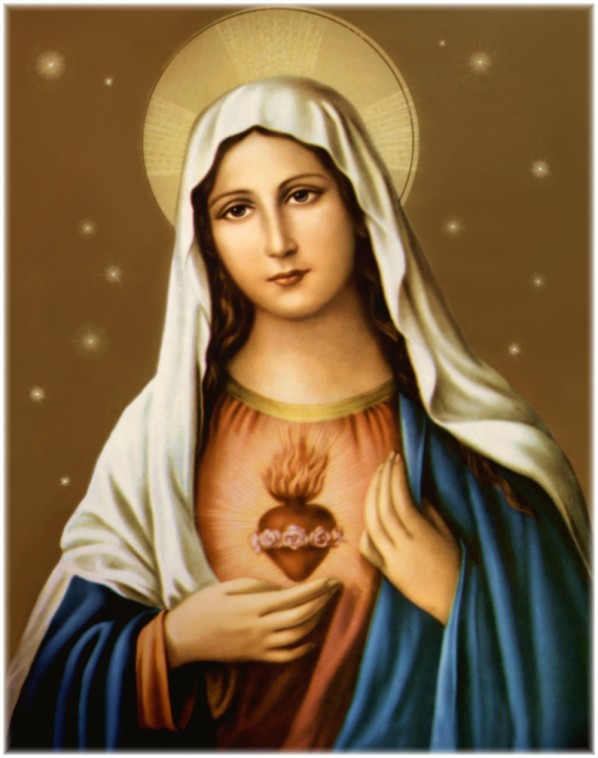 How beautiful to contemplate the Hearts of Jesus and Mary. All Saints Museum has updated our Holy Card Project exhibit to include cards of the Sacred Heart of Jesus and the Immaculate Heart of Mary.

We sholuld always keep in mind that Our Father is the creator of all things visible and invisible.  Our human hearts are visible, but they in a sacramental way point to the heart of our soul which is invisible.  Jesus recieved His human heart when Mary said yes, and she then concieved the Sacred Heart by the Power of the Holy Spirit – and this was a reflection of what was happening in her Immaculate Heart.

Jesus and Mary be with us always!  Amen. 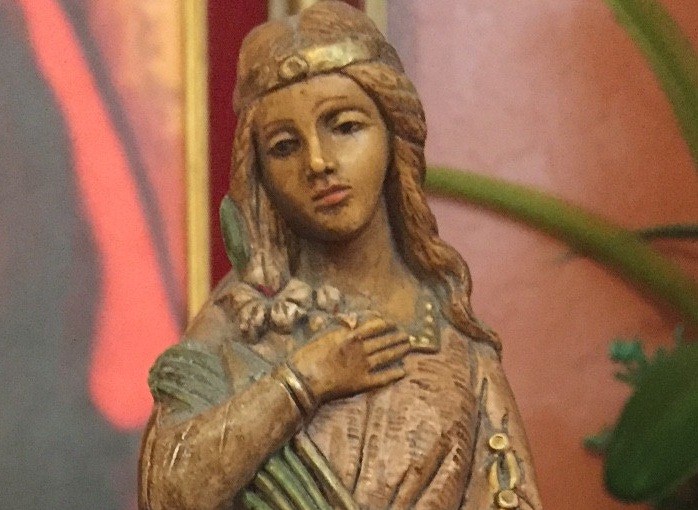 All Saints Museum is still in the process of finding a “home”.  But we are continuing to add to our growing collection, and we want to be sure to share with all of you.

Please check out our latest Saint Philomena Exhibit!  And check out all the rest of our Exhibits.

If you would like to suppourt our mission, and help us establish a location, please consider making a donation by clicking the secure paypal link below.  We are a 501c3 Non-Profit, so your contributions are tax deductible. 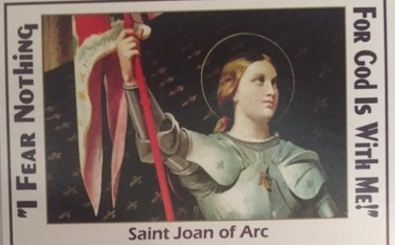 Saint Joan of Arc was only a teenage girl, but that didn’t stop her from leading the French in battle against the English to reclaim the crown.  It was God’s will of course, and Saint Joan of Arc was open to His plan for her, no matter how improbable.  She believed in the Power of God, that “All things are possible with God”.

Please see our Saint Joan of Arc Holy Card in our Holy Card Project, among other Holy Cards.  We will continue to add new cards as they coincide with Feast Days.

Saint Joan of Arc, Pray for us!